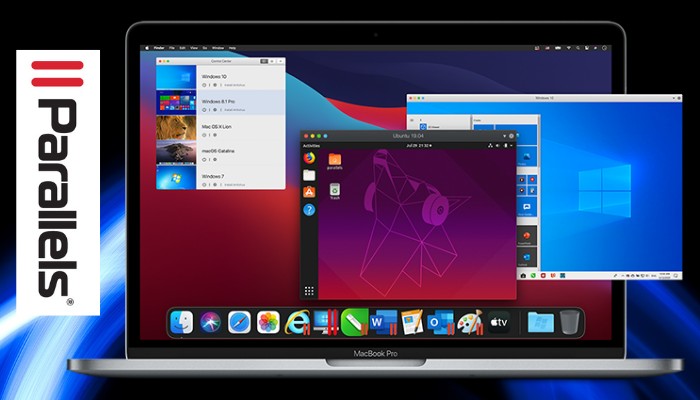 Parallels Desktop 17 for Mac has just been released and has been rebuilt and optimised to run natively on any Mac, be it the Intel processor or the Apple M1 chip, making it Parallels’ most powerful virtual machine solution to date. For those that are new to Parallels, Parallels Desktop creates a virtual machine that allows you to run Windows and Linux side-by-side with your Mac operating system. This essentially means that there is no more need for you to choose between your Mac or PC as Parallels enables you to use multiple operating systems simultaneously. Parallels Desktop 17 for Mac is optimised for the latest Windows 11 updates, macOS 12 Monterey with improved drag-and-drop and compatible with the latest Linux updates.

Parallels Desktop 17 is fast, powerful and easy to use and allows you to run thousands of Windows apps like Microsoft Office, Internet Explorer, Access, Quicken, QuickBooks, Visual Studio and even graphic intensive games and CAD programs without compromising on performance or rebooting.

Experience significant performance improvements in Parallels Desktop 17, which includes powerful new features for the Apple M1 chip Mac. You can expect up to 38% faster Windows resume time, up to 25% faster 2D graphics and up to 28% faster DirextX 11.

Parallels Desktop 17 delivers much smoother Windows UI responsiveness and synchronised video playback due to its improved display driver.  In addition the new driver boosts frame rate in many Windows games for a greater gaming experience and provides better synchronisation with the Mac display.

Expect seamless end-to-end user experience with fewer distracting changes in appearance during Windows sign in, shut down, and software updates.

Drag and drop content between apps and OS seamlessly

Text or graphics between Mac and Windows applications can be dragged and dropped quickly and easily. When utilising macOS Monterey you can drag and drop any content from Windows apps to Quick Note as easily as from macOS apps.

More super-speed storages, including Samsung T7 Touch, Pro Elite portable SSDs, and others are supported via USB 3.1. The Parallel Desktop menu supports user-friendly device names, which makes it easier to identify and select the desired USB device to connect to Windows.

Improved awareness of your Mac resources and memory. Disk space utilised by Snapshots is now calculated in the updated Free Up Disk Space assistant.

You are now able to re-map AltGr to the Mac Option key to use the left Option key for entering accented language characters and special symbols.

Parallels Desktop 17 automatically allocates the optimal number of resources for your virtual machines so that you get the best performance and experience possible.

Enhanced speed and performance is the name of the game, due to the reinvention and optimisation of Parallels Desktop to natively run on Apple M1 and intel-based Mac devices.

You are now able to utilise your Mac for longer due to Windows 10 now recognising the battery status of your Mac and enabling battery saving mode when your Mac runs out of charge..

Expect an even smoother Windows experience due to the much faster Windows 10 disk performance.

Windows 10 and Windows 11 can now utilise Bitlocker and Secure Boot for a higher level of data protection due to the new virtual TPM chip. You can even connect a USB fingerprint reader to work with Windows.

When resizing the virtual machine window Linux will refresh the display for the new resolution automatically.

It is now possible to create an independent virtual machine from a linked clone, in two clicks, with the Parallels Desktop 17 for Mac Pro Edition. The new UI option or Parallels Desktop CLI can be utilised to accomplish this according to your preference.

Not only is the new plugin much easier to install in Visual Studio 2019, but the Parallels Desktop plugin for Visual Studio to debug code in a standalone virtual machine was updated to support Mac computers with the Apple M1 chip.

Business administrators can now set up pre-configured Windows virtual machines to Mac computers with Apple M1 chip. Upload to cloud storage, install all the necessary applications, prepare a package and specify a download link and description in Parallels My Account.

Parallels Desktop 17 is a universal binary that enables the creation of just one package for Intel and M1-based Mac computers and leverage corporate virtual machine provisioning to deliver a Windows 10 virtual machine image after deployment.

When resizing the virtual machine window Linux will refresh the display for the new resolution automatically.

Parallels Desktop automatically detects what is required, so you are up and running within minutes. If you require Windows you will be prompted to download and install Windows 10 or choose your existing Windows, Linux, Ubuntu or Boot Camp installation.

How Much Does Parallels Desktop 17 cost?

The standard edition is a one-time purchase priced at $79.99, while the Pro and Business editions require a $99.99 yearly subscription. Upgrading from an older version to Parallels Desktop 17 costs $49.99. Monthly payment plans are also available. Students are eligible for a 50% discount. Lower down in this article you will be provided with a link that will entitle you to the 50% student discount.

Any Bonuses Included With My Parallels Desktop 17 Purchase?

This bonus includes more than 30 one-touch tools. Clean your drive, take screenshots, download a video and much more, all with a single click.

This bonus includes more than 30 one-touch tools. Clean your drive, take screenshots, download a video and much more, all with a single click.

ur Mac from any Android device, IOS device or browser with Parallels Access.

Can I test drive Parallels Desktop 17 before purchasing?

You certainly can! The trial version of Parallels Desktop 17 will entitle you to 14 days of unrestricted use in order for you to determine whether Parallels is for you or not.

What if I need help? Does Parallels offer any support?

What if I am a student? Does Parallels offer any student discount?

The news just keeps on getting better and better. Of course Parallels got you covered! As a student you are entitled to a full 50% discount. Now how is that in regards to value for money? You can access your 50% discount here: Parallels Desktop 17 50% student discount

2 thoughts on “Parallels Desktop 17 For Mac – Fast, Powerful And Easy!”

This website uses cookies so that we can provide you with the best user experience possible. Cookie information is stored in your browser and performs functions such as recognising you when you return to our website and helping our team to understand which sections of the website you find most interesting and useful.

Strictly Necessary Cookie should be enabled at all times so that we can save your preferences for cookie settings.

If you disable this cookie, we will not be able to save your preferences. This means that every time you visit this website you will need to enable or disable cookies again.